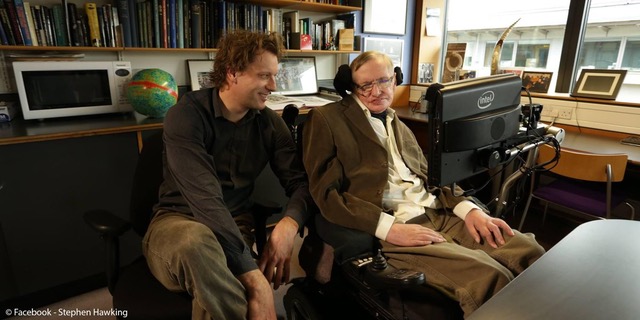 I had the good fortune to meet Stephen in 1997 when he took me on as his PhD student `to work on cosmology, the real reason why we seek a final theory’, as he put it. This was the beginning of a wonderful and intense collaboration and friendship. We completed our last paper shortly before Stephen’s passing on 14 March, 2018.

In brief, we wanted to get a better understanding of the origin of time, that mystery at the heart of existence. Time had been high on Stephen’s agenda throughout his career, from the big bang singularity theorems he proved with Roger Penrose in the mid 1960s to his adventures with imaginary time in the early 1980s.

However the picture got much more confusing in the 1990s when physicists realized there could have been many big bangs producing a `multi-verse’, a patchwork of different universes each with their own course of time. The multiverse challenged science as we know it. We can’t hop from one universe to another to test it and cosmological theory didn’t tell us in what kind of universe we should expect to find ourselves. In some sense the multiverse gave rise to an information paradox similar to the one stemming from Stephen’s famous discovery in 1974 that black holes radiate and appear to destroy information rather than storing it in one form or another. Destruction of information leads to nothing short of an apparent breakdown of the basic predictivity gained by science.

So we set out to disentangle some of the paradoxes associated with the multiverse. Stephen felt that if were able to come to grips with the multiverse, we would be led to a whole new vision of the cosmos. And we did. In our last paper we developed a new cosmological theory in which the direction of time is emergent, much like a dimension of space emerges in a hologram. Time in our theory wasn’t a given but became contingent on the interaction of a myriad of quantum bits, and with this, it turned out the multiverse was nowhere to be found in the theory. With characteristic and unmitigated enthusiasm – and his irresistible sense for drama – Stephen announced to the world that we had solved the multiverse paradox, adding he had never been a fan of the multiverse.

It has been a highlight of my life to work with Stephen. I fondly remember his love for physics, his passionate search for ever deeper truths and his boundless epistemic optimism that we can tackle these profound and mystifying cosmic questions. Stephen also had an incredible joie de vivre. Working with him was fun – you never quite knew when the physics ended and the party began.

Looking back, I realise that we were on the verge of carving out a whole new philosophy of cosmology that is the analog of the Darwinian revolution in biology. We argued in our last paper that physics shouldn’t be based on a God’s eye view from outside, which it has assumed ever since Newton, but adopt an embedded view onto the cosmos and its laws that is typical of biology and of historical sciences in general. `We put humankind back in the center [with our theory],’ Stephen said when the ink of our paper had barely dried. It is fitting that his ashes are now buried between the graves of Isaac Newton and Charles Darwin in Westminster Abbey. The vision we arrived at shortly before his passing bridges Newton’s mathematical rigor with Darwin’s profound insight that in a deeper sense, we are one.